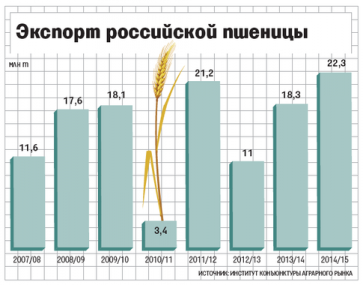 Wheat exports for the 2014/15 agricultural year already smash previous records — at the beginning of June they amounted to 22.3 million tones, Dmitry Rylko, the General Director of IKAR (the Institute of Agricultural Market Studies) told Vedomosti. According to his stats, the previous maximum had been set in the 2011/12 agricultural year, when 21.2 million tonnes of wheat were exported. Mr Rylko explained that the 2011/12 record was hit in the year after the grain export embargo was lifted, and 2–3 million tonnes had already been exported from crops of the previous year. All this means that the current record is down to the effect of a really excellent harvest.

The Ministry of Agriculture is more cautious in its figures than Mr Rylko. They put the wheat exports for at 20.5 million tonnes, according to a source within the Federal Customs Service. For the entire agricultural year grain exports totalled 30.8 million tones, of which wheat accounted for 21.2 million tonnes, the Ministry of Agriculture said. However, these figures do not factor in wheat deliveries made to Kazakhstan.

According to Mr Rylko’s figures, nearly 700,000 tonnes of Russian wheat was delivered to Kazakhstan. This concurs with the figures of Russia’s main rail freighter of grain, Rusagrotrans.

In 2015 Kazakhstan became an exporter of Russian grain for the first time, a factor prompted by its own harvest figures. In 2014 Kazakhstan harvested 17.2 million tonnes of grain, of which wheat made up 13 million tonnes. The local Chamber of Business Leaders said that this locally grown wheat was of poor quality, however.

Rusagrotran’s figures for the July 2014 to May 2015 agricultural year to date show 21.8 million tonnes of wheat, while for 2011/2102 the total was 21.17 million tonnes for the entire agricultural year. This is all connected to good harvests and healthy export figures — up to Feb 2015 when the tariffs are calculated, said Mr Igor Pavensky of Rusagrotrans, the Director of Strategic Marketing. «After wheat exports fell nearly twice over, compared with 2011/2012. If it hadn’t been for the export tariffs which were in place from 1st February to 15th May, the record would have been hit earlier» Mr Rylko asserted.

Export Tariffs for wheat — calculated at 15% of the Customs Price plus 7.5 euros, but not less than 35 euros per tonne — were brought in until 15th May. After the introduction of the tariffs, Russian grain exports fell to the level of the previous period in 2014, by 4% to the CIS countries and down by 8% to international markets, as calculated by the Eurasian Economic Commission.

The record exports are truly due to the excellent harvest plus the strong reserve holdings from the previous year, according ot Mr Arkady Zlochevsky, the Board Chairman of the Russian Grain Union. During the period that tariffs applied there was a drop which is only now beginning to lift, he explained. In the last week alone wheat exports had totalled 400,000 tonnes — roughly equal to a whole month’s exports during the tariff period. However, from 1st July a new tariff comes into force, applying primarily to seed, and to durum wheat. These have a high net value, and production will become unviable, Mr Zlochevsky warned.

The new tariff on wheat will total 50% of the tonne price of grain in the contract as calculated in roubles, minus 5500 roubles per tonne — but no less than 50 roubles per 1 tonne. In addition to the fiscal revenue generated, this will have a regulatory influence on independence fluctuations in world market prices, the government believes.

On 1st July Mr Zlochevsky sent a letter to Russian President Vladimir Putin, with a request to rethink the parameters of this planned tariff introduction on wheat, on the advice of the business community. The Russian Grain Union suggests the alternative of increasing prices when the tariff comes into effect — from 11,000 roubles to 13,000 roubles per tonne of  wheat — and proposes indexation against the net costs of production.